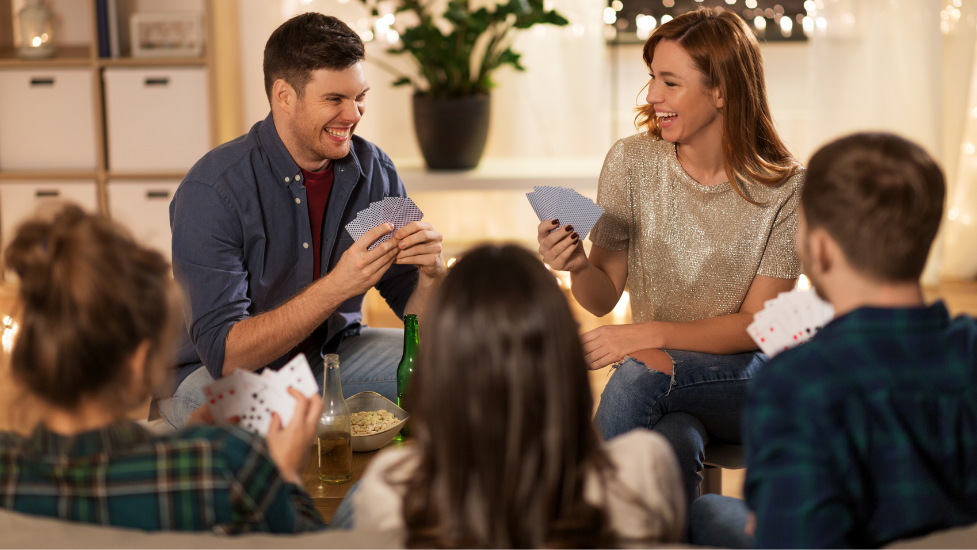 Best card games every flat should own!

It's exam season and things can get a little overwhelming. Here are my picks for card games that cost under £25 that are perfect for letting off steam with friends!

The classic party card game. Uno is the cheapest one on the list, easily found for under £5, and is also the most accessible. You can not only play it in person, but there are apps on nearly all modern devices such as smartphones, Nintendo Switch or Xbox, allowing for online play. Uno is a game where the goal is to get rid of all your cards fastest by being a nuisance to the other players: skipping their turns, forcing them to draw an unreasonable number of cards, or never letting their turn come by constantly reversing the play direction (a personal favourite). Uno has also got the Monopoly treatment of having its own ‘house rules’, so there are many variations of the rule set. If you want a truly rage-inducing experience, allowing players to steal each other’s hands in the 7-0 ruleset is my recommendation!
It can be found easily for less than £5.

Hanabi is a wonderful co-operative game where you win or lose together! What makes this game stand out is that you hold our cards so that all other players can see your hand, but you cannot. Thus, players will use hint coins to give clues about another player’s hand, who will then try their best to remember that information for as long as it is needed (it could be the entire game!) The aim is to set down cards from 1-5 in their respective colour suits, but make a mistake and you lose a life. It’s all about the communication skills for this one!
Hanabi can be found for around £10.

This one is going to be hard to sell, but stick with me. First off, you play this game completely in silence. You will have to rely on the psychic connection between players to figure out what move everyone is planning to make. You are given a deck of cards numbered 1-100, and are dealt a certain number of them. Players must then, without communicating with each other, place cards in ascending order. If anyone plays a card higher than one someone still has in their hands a life is lost. The trick is learning how long to wait before you play a card: should I play my 23? What if someone has a 22 but is hesitating because they are scared someone has a 21? But if I wait too long someone could play a 24 and it would all be over!
The Mind costs under £10.

This is a game where players are split into two teams: blue and red. Each team nominates a leader who gets a special grid card showing red, blue, neutral and black space. The leader then looks at the cards laid out in the same grid pattern on the table and attempts to link as many words as possible with a single clue that corresponds to their team colour space on the grid card. For example, if the red team had ‘snowman’, ‘Norway’ and ‘winter’ on their red spaces then the leader could give the clue as ‘cold’ for their team to guess. Watch out! If there was a word like ‘ice’ as well which landed on a blue space, and the red team guessed it then their turn ends and that helps out the blue team. Or even worse, if ‘ice’ was the black assassin spot then the whole game ends and the blue team would win. The joy of this game is getting as creative as you can with the clues and watching teammates bickering over trying to interpret what the leader meant!
Codenames can be purchased for around £15.

I wanted to include this one so badly I raised the budget to its retail price. This game is off the walls ridiculous, I have never laughed harder whilst playing a card game! The idea is that you work together as a team to fix broken parts of your rocket ship. The catch: the ship is a ticking timb-bomb and so everyone needs to fix their parts at the same time in order to live! Naturally, this leads to everyone sending instructions to each other at the same, requesting certain cards to be passed down the line to them and carrying out hilarious anomalies like not being allowed to use your thumbs for the rest of the game. The chaotic energy is off the charts with this one which makes it my top recommendation!
The priciest at £23, it makes for a great present.